We use cookies to ensure that we give you the best experience on our website. If you continue to use this site we will assume that you are happy with it.Ok

I’ve got so much I want to blog about and so little time to actually make it happen. I want to talk about the first day of school and the second day of school and my new plan for bellwork and my new systems for cell phones and dry erase markers and my classroom decorations and my puzzle table and my thoughts on being a working mom and I guess you get the idea…

I guess I’ll start by blogging about an activity I *should* have blogged about last year. For the past two years, the Train Game has been my go-to 2nd day of school activity. I’ve mentioned it on my blog before, but I’ve never written an entire blog post explaining it fully. 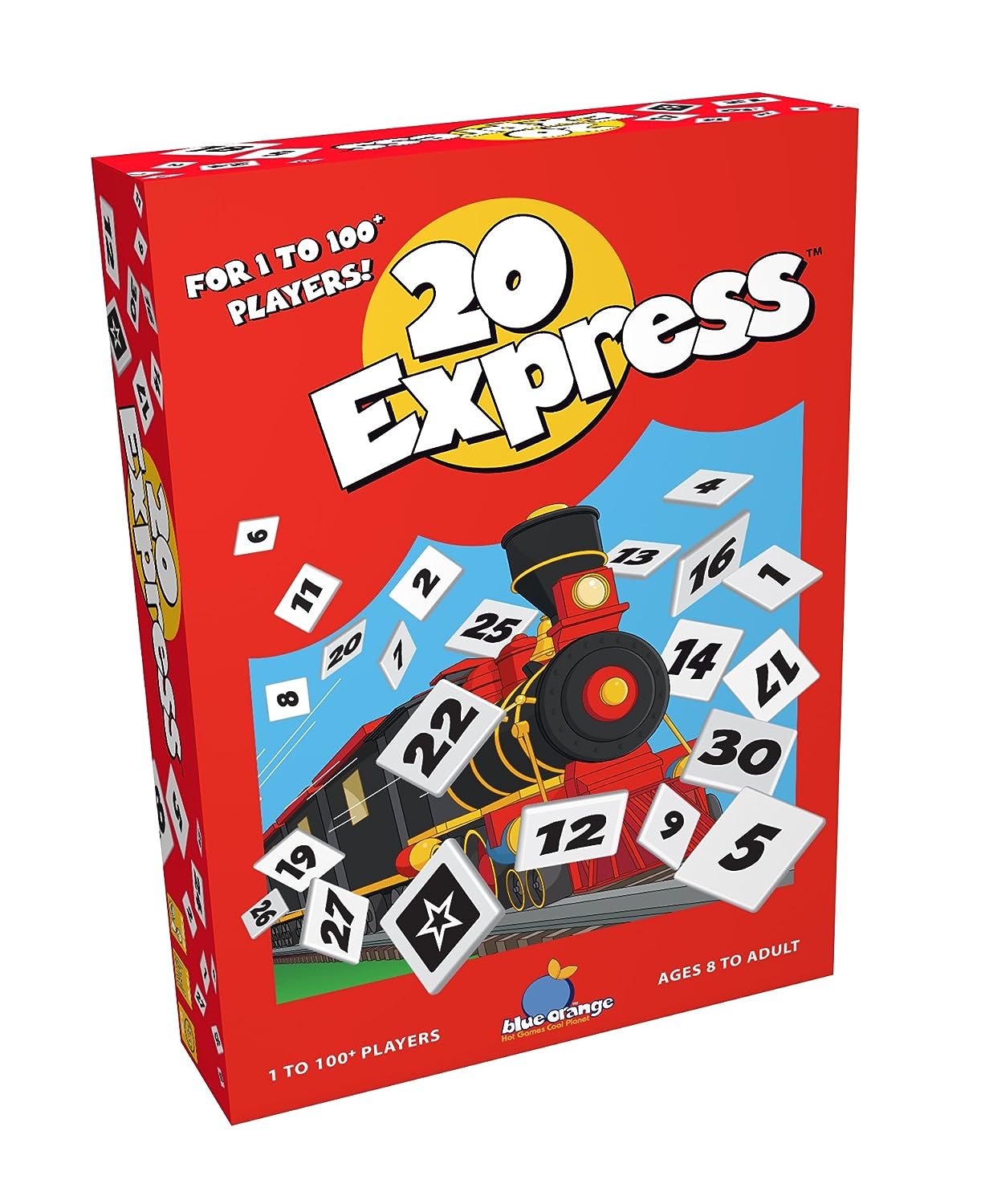 The game isn’t actually called the “Train Game.” It’s actually 20 Express (affiliate link) by Blue Orange Games. But, years ago, my students dubbed it the “Train Game,” and the name stuck. 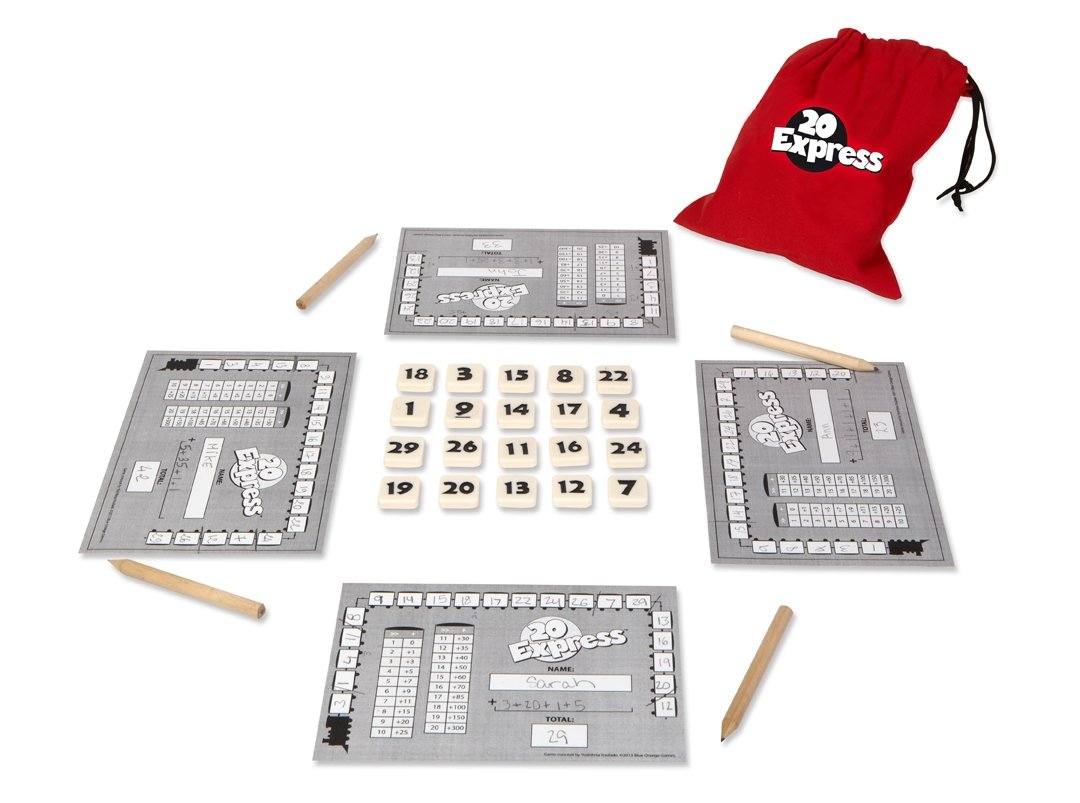 I received this game as a Christmas present in 2014 from my sister. In fact, it was one of the very first board games that Shaun and I played together. I’m pretty sure he’s won almost every time we’ve ever played…

Sadly, the game is discontinued. But, Blue Orange still has printable game sheets on their website for people to download and print. So, all you have to make to create your own game set is a set of tiles to draw from.

The first time I tried explaining this game to students, I really struggled to get them to understand the rules. So, over the years, I’ve created a way to explain them with the help of some visuals and teacher moves. For the past two years, I’ve turned these visuals into a set of Google Slides that I think explain the game pretty well.

I love this game because it is the perfect mix of strategy and luck. It can be played by any number of people. Plus, it’s super low prep! 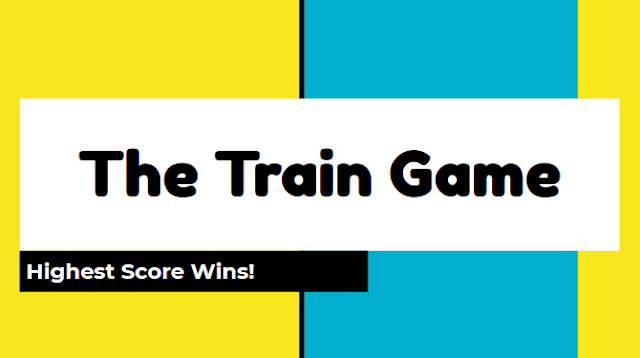 I start my explanation by going over some basic rules. I have my students use dry erase markers, so the “no erasing” rule is super important. 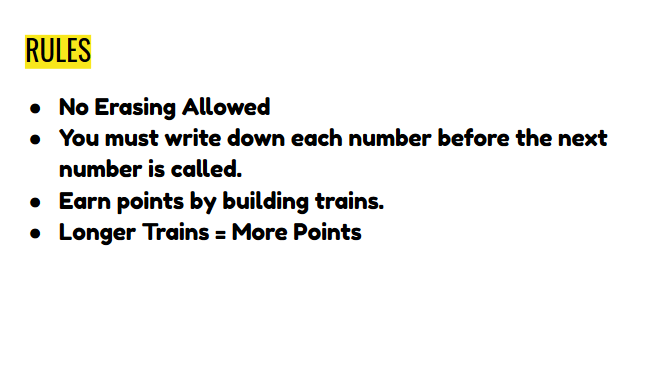 Whenever I tell students that longer trains are worth more points, they always look at me with confusion. This leads to my next slide where I ask “What is a train?” Instead of telling students what a train is, I give them two columns. The sequences on the left are trains. The sequences on the right are not trains. Then, I challenge students to figure out what makes a train a train. 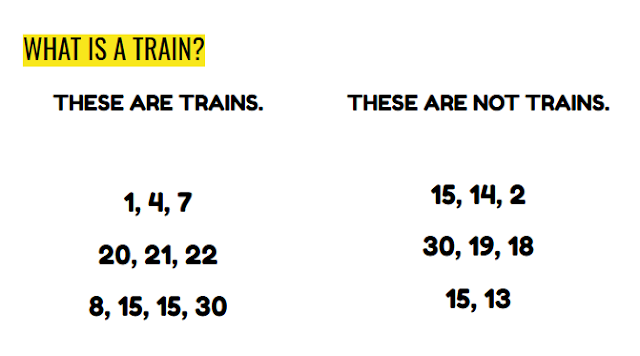 I didn’t intend it this way, but students often come up with the misconception that a train is a sequence that follows a pattern. They notice that 1, 4, 7 involves adding 3 each time and 20, 21, 22 involves adding 1 each time. Usually, they voice this before they read as far as the third example of a train. The 8, 15, 15, 30 throws a wrench into this theory.

After a bit of discussion, students eventually arrive at the realization that a train is a sequence of numbers where each subsequent value is GREATER THAN OR EQUAL TO the previous values.

Next, I try to aid students in solidifying this new knowledge by challenging them to find the trains in a set of numbers. Students often make a mistake of identifying the last train as 9, 8, 11, 15, 40 instead of seeing two trains of 9 by itself and 8, 11, 15, 40. When students do this, they are almost always called out by their fellow students. I barely have to do anything! 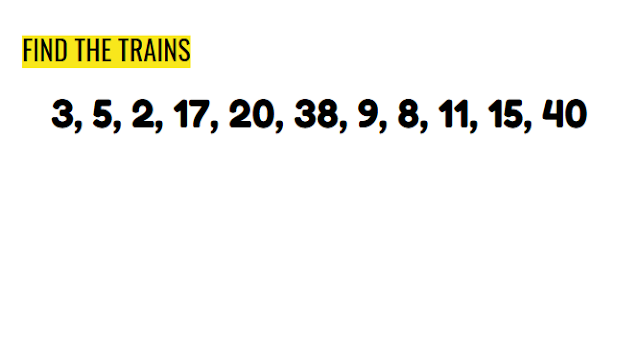 I color code the trains just to re-emphasize what creates a train of numbers. Students cannot understand the rest of the game without understanding what a train is. 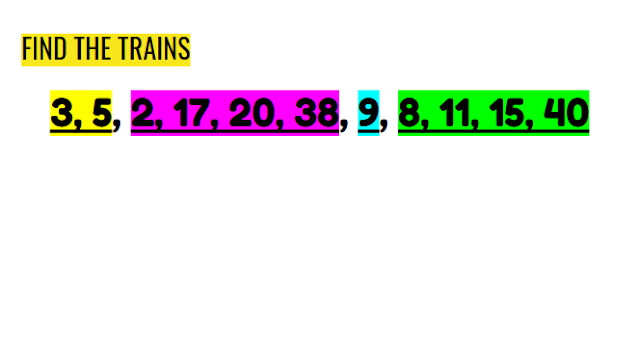 At this point, I tell the class that I have a bucket of numbers that I will be drawing from during the game, and it is to their advantage to know what numbers I could possibly draw. 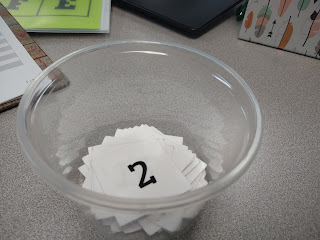 I project a list of the numbers on the screen and ask students what they notice about the contents of my bucket. 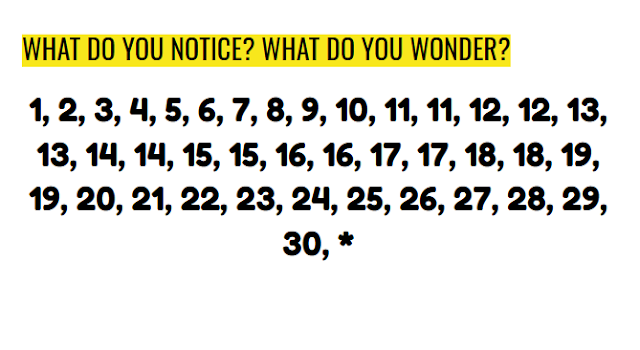 The most important things for students to realize are that the numbers in the bucket range from 1 to 30. The numbers 11-19 appear twice. And, there is one wild card (denoted by an asterisk). This wild can be placed in any position on the game board. At the end of the game, it can be considered to be any number of your choosing when calculating your score. 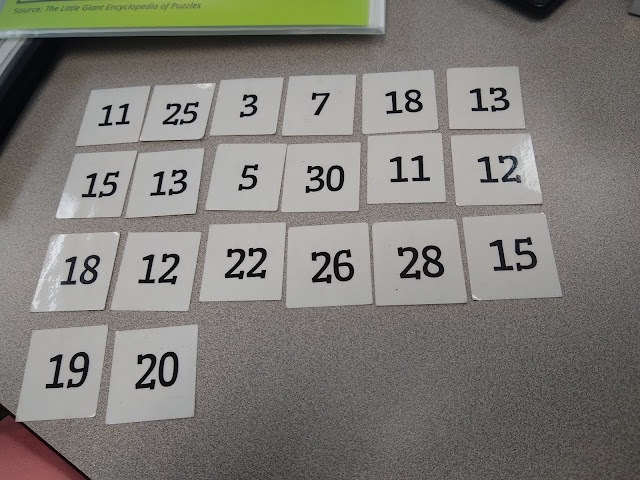 At this point, I introduce students to the game board.Pro tip: Don’t hand out the dry erase markers until you’ve explained ALL the rules. My students, at least, can’t resist the urge to doodle! 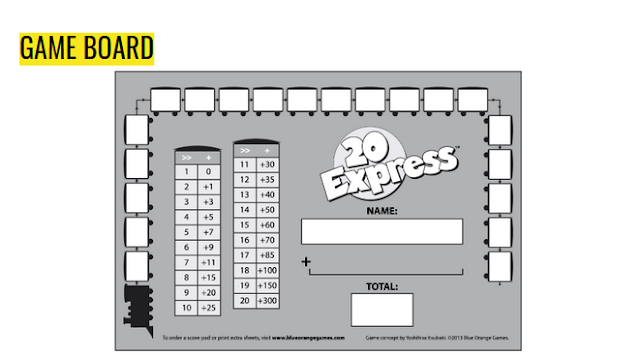 I used to laminate the game boards, but I found students had a really hard time erasing the dry erase marker from the laminated plastic. Now, I use dry erase pockets (affiliate link) for this activity. They erase SO much better. Blue Orange has a free download of the game boards on their website. 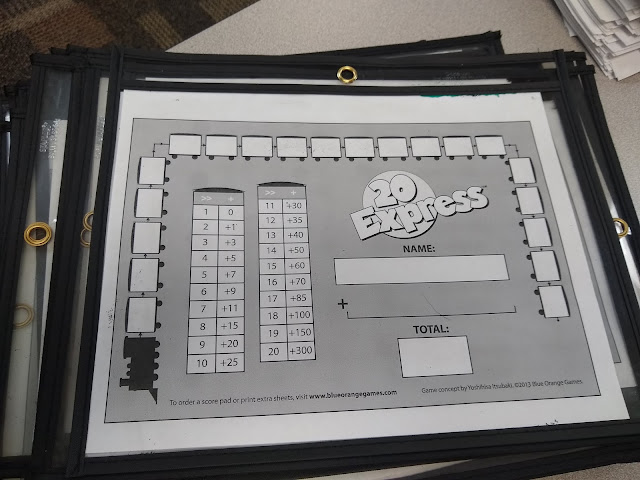 During the game, students write each number as it is called in one of the 20 train cars around the edge of the gameboard. The goal is to create trains that are as long as possible. The longer a train is, the more points it is worth. 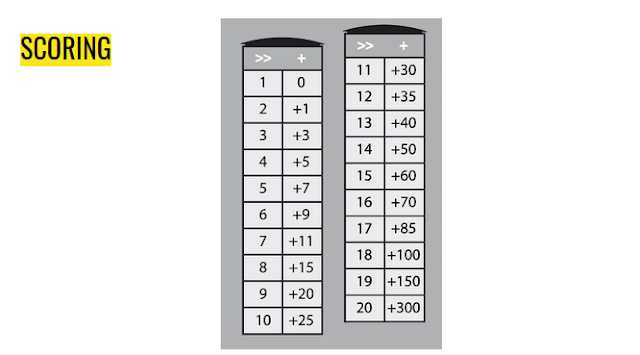 I’ve found that the best way to get students to wrap their mind around scoring and game play is to share a sample game board and ask students to calculate the student’s score. 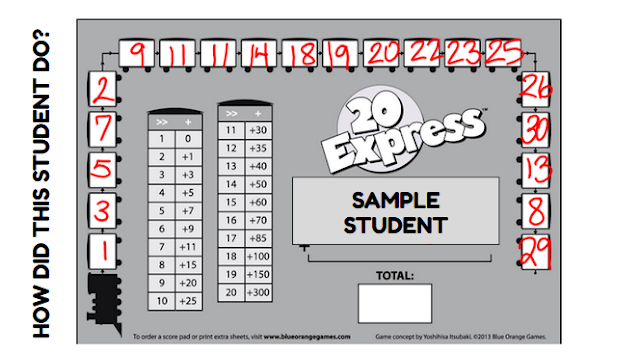 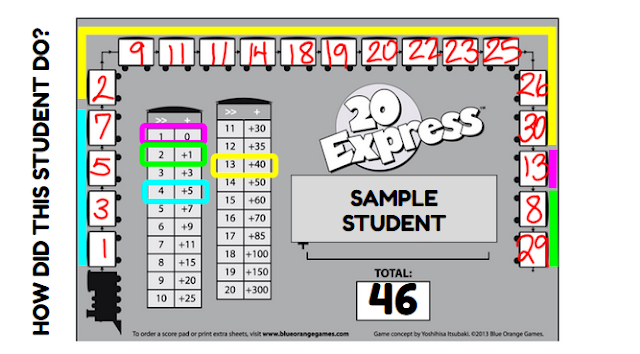 Then, I challenge students to see if they can beat this sample student’s score of 46. 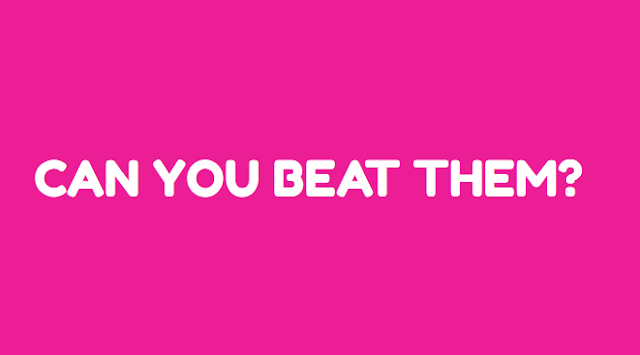 Let’s see if I can summarize the rules of game play. 20 numbers will be drawn. After each number is drawn, the number must be written in one of the train cars on the game board. Numbers cannot be moved or erased once they are written down. Each number must be written down before the next number is called. Try to arrange the numbers in the train cars so that sequences are formed where each number is greater than or equal to the numbers that come before it. Longer sequences are worth more points than shorter sequences. Highest score wins! 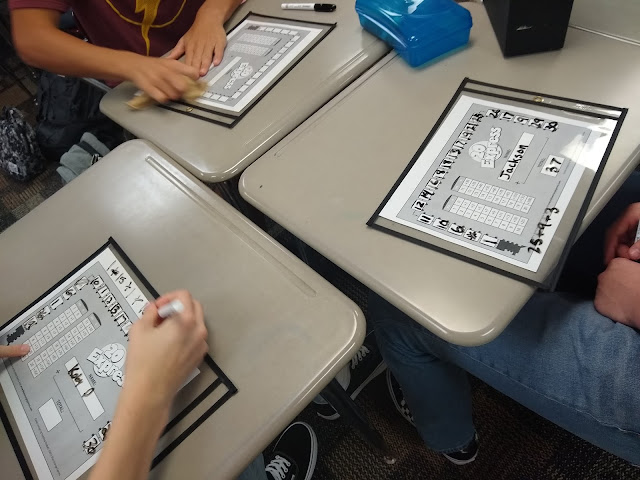 The first game that we play as a class is definitely a learning experience for students. It’s often about halfway through this first round that the rules/strategy of the game finally click for ~25% of students. 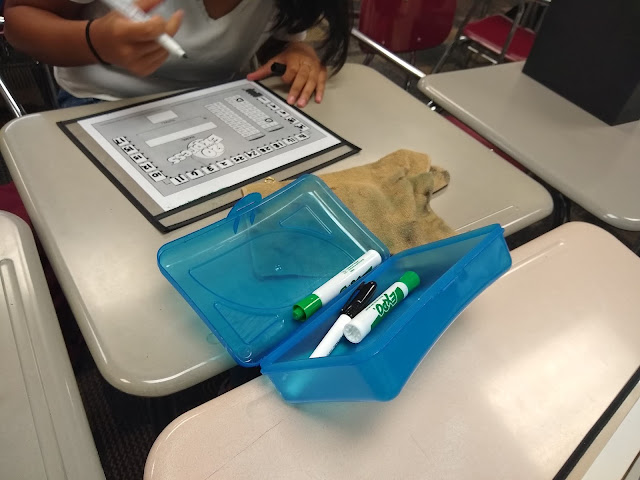 I love to watch students’ strategies grow and develop as we play subsequent rounds. This game truly is a student favorite. I hope your students enjoy it as much as mine!

As for time required, I was able to talk through the explanation of the rules, play 3-4 rounds of the game, and we still had 10-15 minutes left of our 50 minute period. One thing to be aware of. If your principal walks in your classroom while you are playing this game, they will assume that you are playing bingo!

UPDATE:
After many requests, I have uploaded a copy of the game card and template to cut out your own pieces here. You can access the Google Slides I created here.

3 Hares Puzzle (and Other Puzzles of Late)

September 1, 2019 / 30 / 0
If you want a single page with easy-to-find links to every episode of The Mechanical... Continue reading

3 Hares Puzzle (and Other Puzzles of ...

Select the fields to be shown. Others will be hidden. Drag and drop to rearrange the order.
Compare